skip to main | skip to sidebar

HAHAHA.. What happen in Malaysian politics rite now? Does he really using bomoh? If he does not, why such people are really assured to release that statement? We'll see more after dis.. :)

"Is it me?" said Zambry confusely..

SAME finalist, SAME winner..The siamese Azzuri has won the tournament for third time in a row after defeated the young Onitsuka by 2-0. Dat day, at UTP pitch, kick-off started at 5.30 pm with supporters from each side were in excited and energetic emotions. Me and my lads were just arrived at the moment. Yellow for azzuri while blue is the colour for Onitsuka.. In the 1st half, the game was really dull because Azzuri had applied their attacking strategies to crush the youngster's defensive wall while those Tiger's were maintaining their defensive style with just a few attack which does not really show any threat to those siamese.. Halftime break, the score was 0-0.. 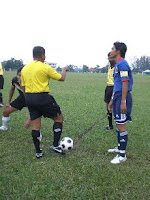 Me, matshah and achap took our seat in between the Siamese fan (mak aih..awek ni kejap ckp siam, kejap kecek klate). PRIITT~~!! and the game started. Both team decided to make a change of play during second half with more goals, hopefully. Just in 60 minutes of play, Onitsuka's player were injured by Azzuri's defence playmaker.. Substitution had to be made quickly.. While the injured player being treated by his team mates, I heard someone said "Aku tau kiter bleh menang..Aku yakin,". That is from Onitsuka's player which has double-yellow card, cause him a suspension for this final round.

GOAALL~~!! Azzuri got 1 nil up.. Celebration and joyful moment from Azzuri side, imaging their 3rd succesfull achievement since 2007. The Tiger's fan was shocked, praying for the referee to cancel the Azzuri's opening goal. Now I am hoping a great comeback style from those youngsters so the match can be brought into extra-time. But the hope was just hopeless.. about 5 minutes before full time, the siamese had added their goal list , thanks to their striker (nigger mana ntah) who is one-on-one with the keeper and managed to control the ball nicely before put it in the back of net. Mistake from Onitsuka's keeper who rush out too early to cut the nigger's ball control. The Azzuri's crowd was going wild and crazy.. like a bunch of crazy monkeys on morphin. There is no time for Tiger to level the score. Everyhting is over when the referee had blown his final whistle for UTP League 2009 and Azzuri had sumthing to celebrate tonight.
Posted by tidoxlena at 9:07 PM No comments: 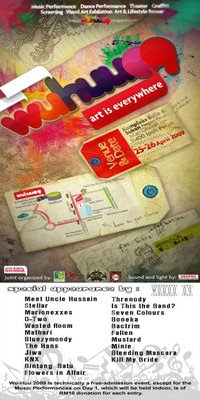 'Art is everywhere'..everybody has their own way to express the beauty of art. So make sure you be part of them..

Wat r u going to do on sunday? sitting on your fuckin chair and spend your time having Pak Ali's kentucky fried chicken? or maybe watching last night's english premier league highlights which you have recently downloaded from fred54? well, i know wat i rather do..

On this peaceful Sunday, just a couple days ago, me and my pals went to Ipow to attend some art festival called WUHUU.. Near at Ipow stadium, not to watch perak fc play, but some good stuff called 'the art of music' are go 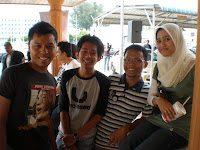 ing to be played..


Wat makes me dissappointed was the absence of dis band called 'fallen'.. they withdrew the performance on dat day due to some technical prob. it's so fucked up coz we just recently noticed when we have arrived. anyway, the drummer is there.. a handsome guy wearing stripes shirt in the picture. (bro, wat a happy life u are having now. kenduri nasik minyak jangan lupa aku!!) haha..

WUHUU is a 2-day event (saturday and sunday), providing such a great band like Meet Uncle Hussain (waaaaa~~!!!!!), bleeding mascara, and Mathari. But we have been told dat all the big-named band 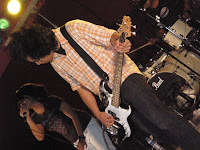 had played yesterday..damn, missing Uncle Hussain's "halusinasi"..On, sunday..the entrance fee is rm5.. boley la..band2 gempak pun xde sangat arituh.. Majority are outsiders. From Cyberjaya, KL..all of them came to Ipow.. The music was great..the sound engineer has done their job well. But the attendance was really pathetic. about 60 attendance i guess, but everybody just lepak2 kat tepi dinding jer. WUHUU~~~ =( kempunan nak mosh~.. here's some of the pic's u might wanna see..sorry viewers, we can't publish their band name due to privacy and WUHUU's policy (ceh, padahal xtau nama band..). check it out~

While im busy taking pics, wat really shocks me was there are few makcik and pakcik, attend to WUHUU dat day.. accompanied by their children. hehehehe.. maybe their missing the damn old days. anyway, there is no discrimation in music.. as said by azreel' Roots and Boots, "We dun care what colours are you, who the hell you are, ju 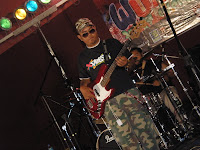 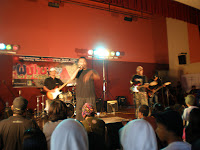 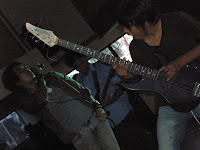 Last nite, me and my friend (poi and chap) went to dis mamak stall to watch a london rivalry premier league match between West Ham and Chelsea. Me and poi are huge Blues fan. What about chap? Well, he is Gunners supporter who enjoying the Chelshit game (:-P. We came about 19' after the game started. Everything was cool, just only three of us in front of LCD tv. Hehe, u'rite.. Only 3 of us, coz other tv's were showing Hull city vs Scouse FC (you'll fuckin walk alone).

What amazed me was Manchienne is play at right full-back. Wow, it's the first time i watch dis 21 years old kid play since he always warming up the bench. His performance? Hm.. ok lar.. still trying to adapt with the atmosphere. The passing still awful but i do believe this England youth captain have a great prospect in future.

At half-time break, my best mates (taq and ray) joined our feast.. BLA BLA BLA BLA..
Then the match starts..

A fuckin boring match ended when Frank Lampard crosses the ball at the left corner of penalty box to Solomon Kalou who had his chance open in front of goal. Just using the right foot and GOAL~!!! Nice one, we were one nil up..

GOAL!! GOAL!! wow, where was dat coming from? owh, Liver is two-nil up at da moment. Damn, still have mountain to climb to beat dis scousers.

Penalty for Hammers?? NOO..Sol Kalou had commits a foul on West Ham forward just in the penalty area. My God.. the clock showing 71'. Still need 20 more minutes to turn dis game. But hey... GREAT SAVE bY PETR Cech!!!! He guessed right (at the bottom left) Haha.. good decision by dis czech international keeper. Blues are still winning the game..

Anyway, the game continued to be boring and not interesting at all until full-time whistle.. There is no entertainment in this match. The match ended 1-0 to Blues who won at Upton Park. Win, but not great enough :(
Posted by tidoxlena at 1:20 PM No comments: